Both patterns are by designers based in Rome: Federico Forquet and Irene Galitzine. Vogue 1260 by Forquet is a sleeveless, draped evening dress that’s slit to reveal slim, matching pants. The original was apricot silk crêpe (click to enlarge):

From Galitzine, Vogue 1220 is a three-piece pyjama ensemble consisting of a top and skirt in black cut velvet shot with Lurex paired with trousers in white crêpe. The bold, rope necklace is by Brania:

As always, details could be found in the back of the magazine:

One of the show’s major draws was Wong Kar-wai’s art direction, with styling by William Chang Suk-ping. (See Rosemary Feitelberg, “Chinese Arts Examined at the Met” or read the press release here.) Like Matthew Weiner’s Mad Men and mid-century American dress, Wong Kar-wai’s In the Mood for Love (2000) and 2046 (2004), with costume design by William Chang, have virtually defined the image of mid-century Hong Kong fashion.

Two circa 1962 Vogue patterns I’ve had in the shop got me thinking about early ’60s Chinoiserie. One is for a cheongsam and pants, the other for a cocktail dress and sheer cape or ‘Ming’ stole:

Interestingly, although Vogue 5571 is clearly a pattern for a cheongsam or qipao, the envelope text says nothing to identify the garment as Chinese. Vogue 5648, on the other hand, calls its voluminous coverup a ‘Ming’ stole—a garment for which I can find no evidence whatsoever.

The Ming Dynasty (1368-1644) is known for its voluminous clothing. Vogue 5648’s Ming stole has deep, two-piece sleeves and back fullness released from gathers at the neckline. Here’s the back view:

The back neckline detail recalls this Balenciaga evening wrap featured in an earlier Costume Institute exhibit, Orientalism: Visions of the East in Western Dress:

By contrast, the instantly recognizable cheongsam or qipao is a product of the modern period, a hybrid garment with a complex history traceable to Manchu dress in the Qing Dynasty (1644-1911).

Vogue Patterns’ mid-century Chinoiserie seems inseparable from the context of the Cold War. In 1962, it had been just over a decade since Mao’s 1949 proclamation of the People’s Republic of China. The Hollywood films Love Is a Many-Splendored Thing (1955) and The World of Suzie Wong (1960) had helped popularize the cheongsam in the West with their depictions of love affairs between an American man and a qipao-clad Chinese woman in mid-century Hong Kong.

For more on the cheongsam/qipao see Juanjuan Wu, “Reinvented Identity: The Qipao and Tang-Style Jacket,” chapter 6 of Chinese Fashion: From Mao to Now (Berg 2009).

Bowling. This early 1960s pattern from Simplicity includes an “action back” shirt and skirt in two lengths. The skirt has inverted pleats in front and back; the shirt, which may be monogrammed, has pleats at the back shoulder seams:

Did you watch the Mad Men finale Sunday night? If you aren’t ready to say goodbye, a New York exhibition, Matthew Weiner’s Mad Men, brings together sets, props, costumes, and other production materials from the show (at the Museum of the Moving Image to June 14, 2015).

Soon after launching this blog in 2011, I began a series on Mad Men-era designer patterns. Like the TV series, it shows the changes that were taking place in fashion in the 1960s. Here’s the full roundup:

I also have two posts on Yves Saint Laurent’s 1965 Mondrian collection, Mondrian! and my version of Vogue 1556, and for the later 1960s, a designers post on Rudi Gernreich. 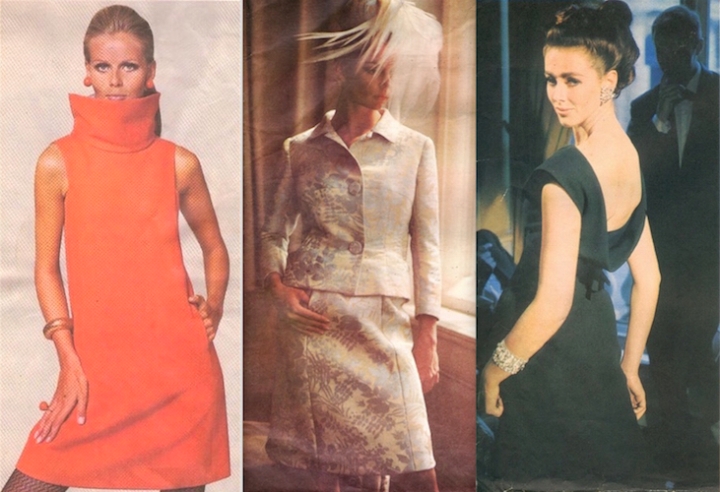 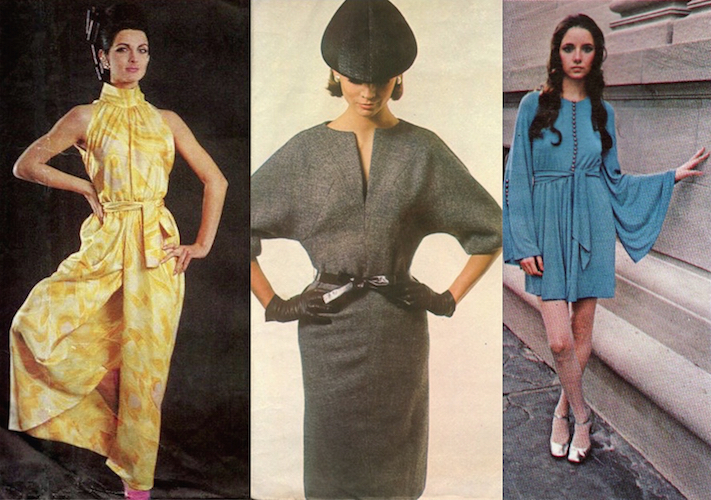 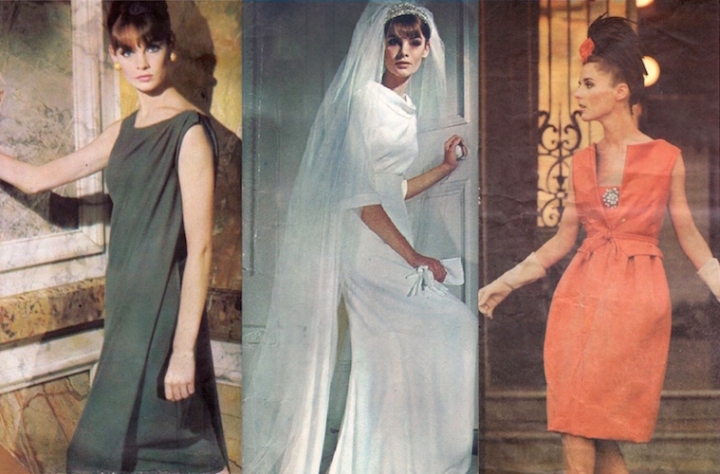 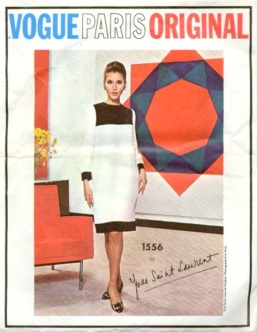 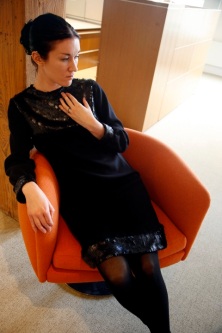 In the mid-1960s, Helmut Newton photographed a two-page Vogue Patterns editorial for Vogue magazine on location at Wanda Beach, near Sydney, Australia.

The editorial features two pieces from a single beachwear pattern: Vogue 6211. The cowl-neck coverup is shown in white terry cloth, the one-piece drawstring bathing suit in double-knit Orlon; the linen hats are by Adolfo and Halston (click to enlarge):

As always, back views and yardage could be found in the back of the magazine:

Click the Patterns in Vogue tag for more posts in the series.

Mary Quant (b. 1934) was the first designer to be signed to the new pattern line. Born in London, Quant met Archie McNair and her future husband, Alexander Plunket Greene, at art school; together they opened a boutique on the King’s Road, Bazaar, in 1955, selling Quant’s fun, youthful designs. Quant is perhaps most famous as a pioneer of the miniskirt. Butterick released its first Quant patterns, featuring Celia Hammond photographed by Terence Donovan, in the fall of 1964.

Butterick 5475 is a mini-length shirt dress with plenty of details including epaulets, side slits, and a self-buttoned belt:

Also born in London, Jean Muir (1928-1995) showed an early talent for dressmaking and needlework. During the 1950s, after working her way up from the stockroom at Liberty, she was hired as designer for Jaeger; she stayed with Jaeger until 1962, when she founded her first label, Jane & Jane. She launched her eponymous label in 1966. Muir was known for her fluid dresses with charming dressmaker details.

Butterick introduced Jean Muir patterns in the spring of 1965. This short, high-waisted dress dates to the late 1960s; the bodice front and slashed, modified raglan bell sleeves fasten with rows of tiny buttons:

Born in Paris as Renée Mésière, Emmanuelle Khanh (b. 1937) married avant-garde industrial designer Quasar Khanh in the late 1950s, around the same time that she began working as a house model for Balenciaga and Givenchy. Turning her hand to fashion design, Khanh was soon at the forefront of yé-yé fashion (Paris’ answer to Youthquake), designing for brands including Cacharel and Missoni before launching her own label in 1969. (Read a 1964 LIFE magazine article about Khanh here.) Today her company focuses on accessories, particularly eyewear.

The pattern is Butterick 3718. (Thanks to Jessica Hastings of myvintagevogue for confirming the number.) This photo shows a full-length view of the dress:

It’s interesting to see an established company like Butterick responding to contemporary Sixties youth culture, facilitating access to Youthquake and yé-yé fashion in the process.

With Mad Men entering its final season, my Mad Men-era series concludes with two posts on fashion designers whose work became available to home sewers in the mid-Sixties. (Browse the series by clicking the Mad Men era tag, or start at the beginning.)

The Fall/Winter 1965 issue of McCall’s Pattern Fashions & Home Decorating introduced readers to the new designers. According to the catalogue, the new line featured “the most outstanding fashions of seven leading American designers and one famous London couturier” (click to enlarge):

Born in Fort Wayne, Indiana, Bill Blass (1922-2002) showed an early talent for fashion design, studying briefly at Parsons before enlisting in the U.S. military in 1942. After the war he returned to New York to work in the fashion industry; by 1959 he was head designer for Maurice Rentner—then a conservative, established Seventh Avenue label. (McCall’s patterns credit the designer as ‘Bill Blass for Maurice Rentner, Ltd.’) In 1970 he purchased the company and renamed it Bill Blass Ltd. Blass was known for his sophisticated but youthful designs favoured by high society. He retired in 1999.

McCall’s 8927 is an asymmetrical, sleeveless shift dress with applied bands and an inverted pleat on the left-hand side:

Born in Louisiana as Samuel Robert Bozeman Jr., Geoffrey Beene (1924-2004) trained at the Traphagen School of Fashion in New York and École de la Chambre Syndicale in Paris, where he also apprenticed with a tailor. Returning to New York, he worked at Harmay and Teal Traina before founding his own company in 1963. Beene was renowned for his innovative, modern designs, as well as his iconoclasm.

Born in Brooklyn as Hannah Golofsky, Anne Klein (1923-1974) also trained at the Traphagen School of Fashion. The pioneer in American sportswear worked in petites and juniors before founding Anne Klein and Company in the late 1960s. Her final collection was completed by Donna Karan, who had begun work at the company in the summer of 1967 as Klein’s intern.

McCall’s 1020 is a sleeveless shift dress with angular armholes and fabulous standing (and convertible) collar. The model is Hellevi Keko:

All three New York designers would later make the switch to Vogue Patterns: Blass in 1967, Beene and Klein in the 1970s.