For my Halloween vampire flapper costume I made one of my favourite 1920s patterns in my collection: McCall 4464, an evening dress by Chanel.

Here’s the illustration from the 1926 Summer Quarterly. As I was putting this post together, I realized that True Blood’s 1926 Lorena and the catalogue illustrator both accessorize a black dress with red beads:

The short evening dress has a bloused bodice, side drapery on the skirt, “trimming strings” or streamers, and self fabric flowers at the straps. The pattern doesn’t include the flowers, but it does indicate ‘material for rosettes’ on the layout. I skipped them for my version—they may balance the streamers, but I’m not really a rosette kind of girl.

Mine and Naomi’s dresses are actually shown side by side in the 1926 catalogue. I can assure you this is an absolutely accurate reflection of our relationship:

I used the same black satin for the slip and the dress. The only alteration I made to the pattern was to grade down the bust by one size. I also shortened the straps, guided by the ‘natural waist’ mark on the slip front.

The basic instructions don’t cover what to do with the drapery or streamers. The trick for the drapery, as I discovered, is to sew it to the skirt sections before closing the side seams. For the streamers, the pieces showed a seam allowance but no lengthwise fold mark, so at first I thought they were meant to be pretty wide. But after scrutinizing the illustration (and contemplating the option of cutting each string twice) I concluded the streamers should actually be sewn together for a narrower width. The finishing was a little rushed, since I was fitting the straps just before we went out; I’m still not sure what to do with some of the rough edges…

Here are some photos of me in the dress: 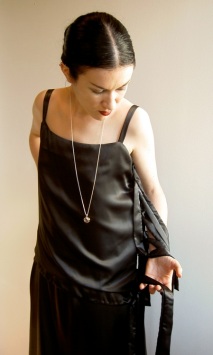 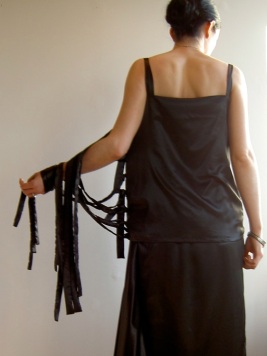 I was surprised by how flattering the Twenties tubular silhouette can be. And comfortable: leaving the house, I had a brief moment of panic, feeling like I’d forgotten to get dressed. (I realize a foundation garment would have been worn during the period.) I think I’ll be re-making this one—maybe I’ll even venture some rosettes.