Lately I’ve been listing a lot of mid-century vintage patterns in the shop, including this 1950s Givenchy pattern from McCall’s:

Inside the pattern envelope is an insert introducing Hubert de Givenchy and detailing the production process for these McCall’s “exclusives.” The insert doesn’t mention that Givenchy is a French aristocrat. Instead, it proclaims he was “born to the fashion tradition,” noting his family’s connection to the Beauvais Tapestry Works and his experience at the Parisian couture houses of Jacques Fath, Robert Piguet, and Elsa Schiaparelli.

The insert is emphatic that these French designs are suitable for Americans: “French in feeling and typically Givenchy, they’re still easy to make and easy to wear—admirably suited to the American way of life because Givenchy designed them especially for McCall’s and for you.”

We are told how, in 1956, the “tall, blond young Frenchman” flew to America for a tour of McCall’s facilities, then flew back to Paris to create his first exclusive series of designs for the company. The designer constructs his toile on an American dress form; he also produces a finished garment using American fabric. Both toile and garment are “air-expressed” to McCall’s headquarters in New York City. A paper pattern is made from half the toile, and the resulting prototype is compared against the designer’s original.

The last section of the insert, headed “Your Spring Wardrobe Designed by Givenchy,” gives an illustration and description for each of the four spring patterns: 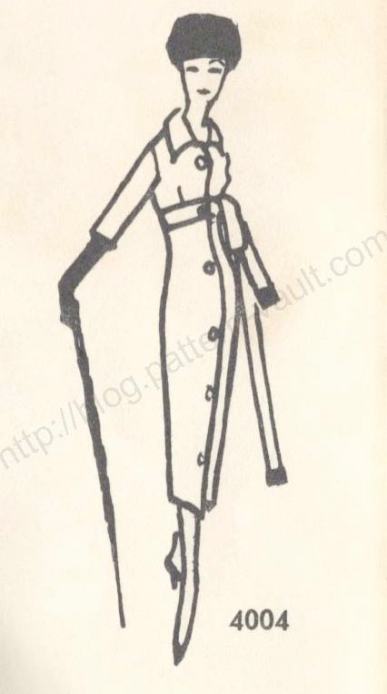 “Givenchy’s all-day ‘runabout frock’ in lightweight flannel. Typical of this dynamic young designer: the wonderful line in the roll-away collar, the way the high-waisted young sash buttons onto the dress. You might also make it in linen or shantung.”

“A suit that cries ‘Givenchy’ in every line. Look at the inimitable cut of the jacket, the rolling curve of the collar. Another Givenchy inspiration: grosgrain-bound buttonholes an inch and a half wide. Givenchy suggests silk or rayon suiting.” 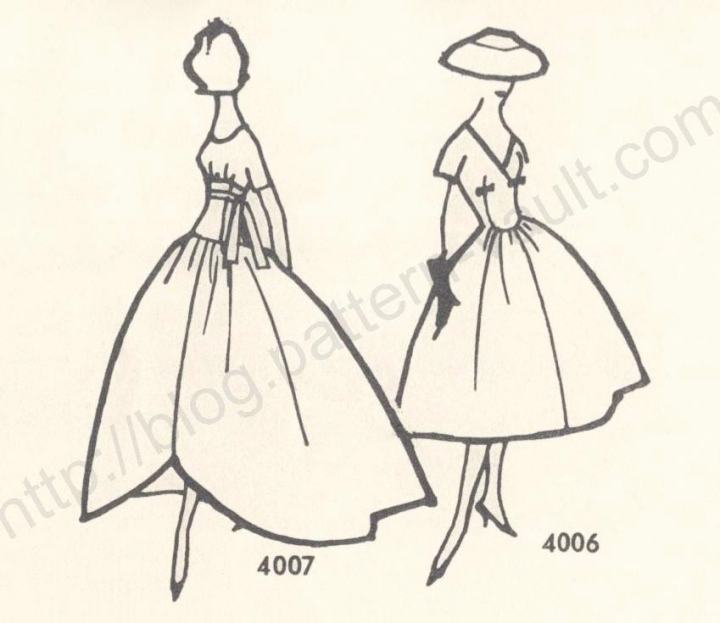 “Givenchy’s young-in-heart evening gown for any age, the belling skirt curved in a prophetic cut-away hemline. Givenchy chose a paper-crisp taffeta, but you could also use polished cotton, silk or satin. The pattern includes a beautifully shaped petticoat.” (4007) “Two flightly [sic] little bow-knots hint at a high waistline on this afternoon frock with bell-shaped skirt buoyed by its own print-bordered petticoat. Givenchy selected a printed tissue-weight taffeta, also suggests silk surah or peau de soie.” (4006)

It’s interesting to see how McCall’s production process for designer patterns differs from Vogue’s, as described in my earlier post. Vogue claimed to adjust Paris originals for American figures, whereas McCall’s exclusives were made directly on an American dress form. Apparently national differences were still an issue, and McCall’s felt it had to address postwar patriotism, even amid continued demand for European designer fashions.

4 thoughts on “Your Spring Wardrobe by Givenchy, 1957”